The native Android Auto saga has a long and winding road, but we’re finally approaching the finish line. Google’s custom-built software for automobiles, now called Android Automotive OS and not to be confused with standard Android Auto mirrored from your smartphone, was first announced a couple of years back as a kind of compromise with an auto industry that realized it could never build software as good as Silicon Valley.

It’s taken various forms, as it’s moved from retrofitted Volvo infotainment systems to new, custom screens. And behind closed doors, it’s gone through countless iterations that have never seen the public eye, as Google has done a careful dance letting automakers have some control of the design while it works closely alongside component suppliers to make sure the in-car touchscreen systems are up to snuff.

Yet now, at Google’s I/O developer conference this year, we’re getting our first glimpse at what this now-polished software may actually look like in its final, consumer form. To show off the latest version of Android Automotive, Google and Volvo trotted out the new Polestar 2, an all-electric luxury performance vehicle designed to compete with Tesla.

To be fair, it’s a prototype version of the car running a prototype version of Android Automotive. But the two companies couldn’t have picked a nicer showcase for the software’s latest iteration. The center screen is a large, tablet-sized 11-inch display reminiscent of Tesla’s infotainment setup. Polestar built an even wider, 12-inch second screen that sits above the steering wheel and mirrors critical info from Google Maps. Everything works together in a way that all car software, in an ideal world, should be designed, if the auto industry had the decades of software experience that Google does. 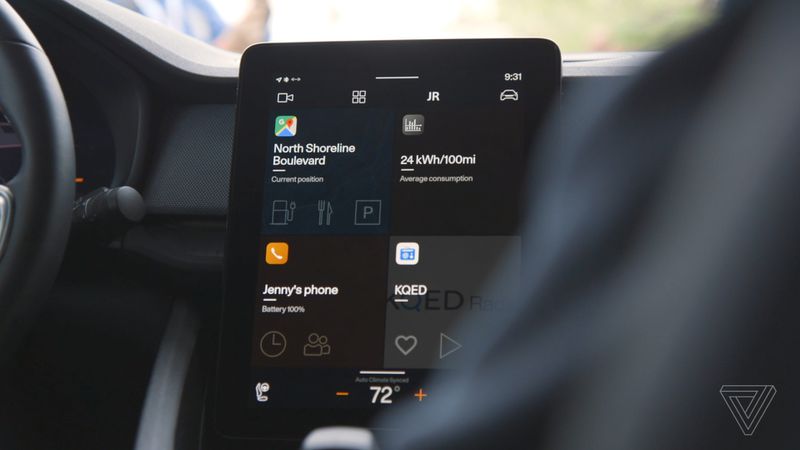 Photo by Vjeran Pavic / The Verge
The whole system is intuitive in a way that goes beyond standard Android Auto, which received an update last week to make it simpler and easier to use, but is still largely mirroring info from your phone in a less distracting fashion. Android Automotive, on the other hand, can be used without a smartphone at all. More critically, it can control core functions of the vehicle — like changing in-car temperature and adjusting steering, braking, and other key mechanical features — all from the center system and via voice, thanks to Google Assistant.

We saw a bit of this in a web preview Polestar released earlier this year, but seeing it in the car itself makes a more convincing argument that this isn’t a Frankenstein blend of Google and auto software, but a well-thought-out hybrid of the two.

The Polestar 2 itself was only officially announced back at the end of February, and it won’t go into production until next year. But it will be the first car to officially get Android Automotive OS with a confirmed suite of Google Play apps, including Google Maps. Other automakers, like Fiat Chrysler and the Renault-Nissan-Mitsubishi Alliance, have signed on to use the software in new vehicles, and Audi is the only other carmaker alongside Volvo to have announced an early partnership with Google back in 2017.

That means the Polestar 2 has the most up-to-date version of the software in what we’re told is very close to its final form. Last year, we saw a version of Android Automotive on a Volvo XC40, but it’s drastically different now and designed for the newer vertical infotainment screens that seem ready to take over the luxury car space and trickle down to mid-tier vehicles in time.

At a broader level, this is just one more chapter in the ongoing battle to control the car. Unlike the home appliance industry, which largely ceded control to the biggest players in tech to take over the smart home with products of their own, the auto industry has a leg up on Silicon Valley: tech companies can’t build products as complex as cars, and even attempts from companies as well-funded and determined as Apple have resulted in failures and pivots. Even Tesla, which fancies itself a tech company, is still a carmaker at heart, and the one automotive industry player to blaze its own trail when it comes to in-car software and touchscreens.

That means there’s a lot of room for the traditional auto industry to keep at least some of its power when it partners with tech giants. We’re starting to see a divide form between those that partner with Google and those opting for Automotive Grade Linux, an open-source project to let carmakers build their own software without having to hand the keys to tech companies. But more so than CarPlay, which seems like it will remain a simple system for the iPhone, Android Automotive is positioned to be a true competitor in the auto market, especially if the software pans out as well for other vehicles as it does for the Polestar 2.