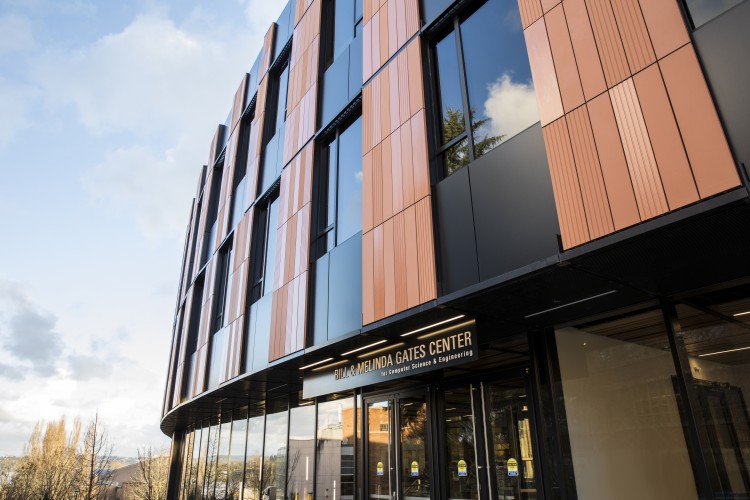 The University of Washington today marked the official opening of the new Bill & Melinda Gates Center for Computer Science & Engineering on its Seattle campus. The building doubles the space available to UW’s Paul G. Allen School of Computer Science & Engineeringto enable a new wave of computing innovation and to educate more of Washington’s students for 21st century careers that will help shape the future of technology.

The 135,000-square-foot Gates Center provides sufficient space to accommodate a doubling of the Allen School’s student body, which has steadily grown over the past five years with funding from the Legislature.

The building’s layout and design reflect the school’s commitment to delivering an unparalleled educational experience to its students. The main floor is devoted entirely to undergraduates. It has laboratories, meeting rooms, community spaces, a café, and a student services center that provides a one-stop shop for academic advising and career guidance. A focal point of the space is a 20-foot interactive display wall that encourages students and visitors to explore the history of the Allen School, the growth of technology in the Puget Sound region, the many contributions of Paul G. Allen and of Bill and Melinda Gates, and the importance of broadening participation in computing. The ground floor includes a 240-seat auditorium and two 100-seat classrooms.

“We invent technology, but we’re all about people,” said Hank Levy, Director of the Allen School. “This building was designed to cultivate a welcoming environment and strong sense of community for a diverse student population — and an environment in which everyone in the Allen School will thrive.”

That community focus is carried to the fourth floor, a flexible event center for hosting workshops, demo days, career fairs and other events. An installation by sculptor and UW alumnus George Rodriguez (MFA, ’09) and an outdoor terrace with sweeping views of the surrounding campus, Lake Washington and Mount Rainier reinforce the connection between the building’s inhabitants and the broader community.

The Gates Center is a place where students and faculty work together to invent the future. The building is home to a number of laboratory spaces that support Allen School research at the leading edge of the field, including a 3,000-square-foot Robotics Laboratory complete with a functioning kitchen to support the development of robots that assist humans with everyday tasks, and a wet lab for exploring the intersection of information technology and biology. The building is also home to the Center for Neurotechnology, which develops innovative devices for individuals with debilitating neurological conditions; the Center for Game Science, which pioneers games for K-12 education and for scientific discovery; the UW Reality Lab, which is advancing the state of the art in virtual and augmented reality; and the Taskar Center for Accessible Technology, which focuses on the development and deployment of open-source, universally accessible technologies to benefit people with motor limitations or speech impairment.

“This is an important milestone for the University of Washington, Microsoft and the broader tech sector in our state,” said Microsoft President Brad Smith. “The Gates Center will provide UW students with the opportunity to learn computer science and ultimately help increase the local talent pool. It truly is an incredible asset for our region.”

The $110 million building was funded through a public-private partnership that included contributions from the state Legislature, the university, technology companies including Microsoft, Amazon, Zillow, Google and Madrona Venture Group, and more than 500 individuals — including more than 300 Allen School alumni — in a campaign led by Microsoft President Brad Smith. While Bill and Melinda Gates were among those who generously supported the project, their participation was not the reason behind the building name. Instead, as a gesture of admiration and gratitude for the couple’s many professional and philanthropic contributions, Microsoft and 13 couples who are long-time friends and colleagues of Bill and Melinda Gates came together to name the building in their honor.

“This is a wonderful Seattle story,” said Allen School professor Ed Lazowska. “When I joined UW, computer science had a dozen faculty members, and Microsoft was a dozen 20-somethings in Albuquerque. Today, the Paul G. Allen School is one of the world’s leading computer science programs, and the Puget Sound region is one of the world’s great technology centers. We’re blessed to belong to a true community — people and organizations that help one another to grow and excel.”

The Gates Center was designed by Seattle’s LMN Architects, the firm that also designed the Allen Center. M.A. Mortenson served as the general contractor for both buildings.

When I was a kid, I went on long car trips with my family in the summer. After hours of driving, crossing a state line […]